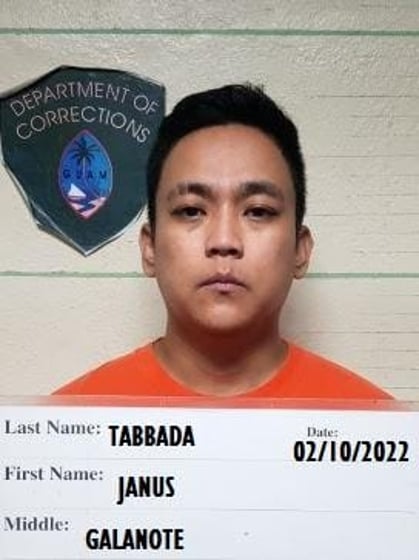 The man who investigators believe is responsible in the deadly shooting of 37-year-old Edward Bamba in Dededo is captured.

Tabbada was on the run from authorities for nearly ten days since the shooting unfolded outside of a home on Chalan Eskuela.

An eyewitness was only able to tell police the shooter took off in a dark-colored sedan.

Officers caught a break in the case following a reported stabbing Monday morning.

As KUAM first reported, a woman showed up to the Dededo Precinct Command after being stabbed and was taken to the Guam Memorial Hospital.

The investigation then forced the hospital to temporarily suspend visiting hours for the woman’s safety.

Police are expected to release additional details about the capture, a potential motive for the shooting, along with the charges Tabbada could face in Superior Court.

Bamba died on Nov. 12 from a gunshot to the chest. His death was ruled a homicide by the Chief Medical Examiner Dr. Jeffrey Nine.

Prison records state Tabbada had been released from the Department of Corrections back in March after being picked up on an arrest warrant in connection to a 2021 aggravated assaulted complaint. Court documents state he got into a fight with one man, and took the man’s gun as collateral for money he was owed. Tabbada was also charged in a separate incident were he alleged hit a woman known to him with a gun, while preventing her from leaving a residence.

Additionally, he was arrested in 2020 for illegal drug possession and in 2019 on multiple counts of family violence for allegedly threatening three people with a knife, records state.