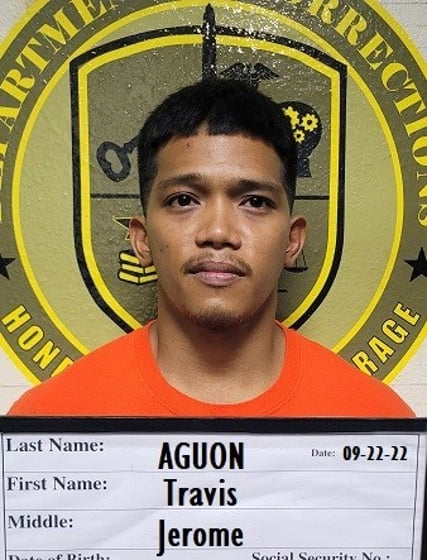 He allegedly had a gun as he chased two Guam Waterworks Authority employees, threatening them.

Now, 23-year-old Travis Jerome Aguon is facing charges of Terrorizing with Special Allegation or Possession or Use of a Deadly Weapon, two counts of Assault, and two counts of Harassment for each victim.

According to a magistrate's complaint, on Sept. 22, the employees had finished at a job site when a person, identified as Aguon, began tailgating them. The pair drove into the Merizo Post Office parking lot where Aguon allegedly blocked them in. Aguon then allegedly brandished a black handgun and threatened to kill one of the men. The men continued to their job site in Malesso' and while waiting for police, Aguon showed up. A passenger in his car allegedly got out and told the victims Aguon wanted to talk. The victims asked if Aguon had a gun and the man said, "Yeah, that's my gun, but don't worry."

As one of the victim's approached Aguon's car to read the license plate, Aguon allegedly stepped out holding the gun before leaving.