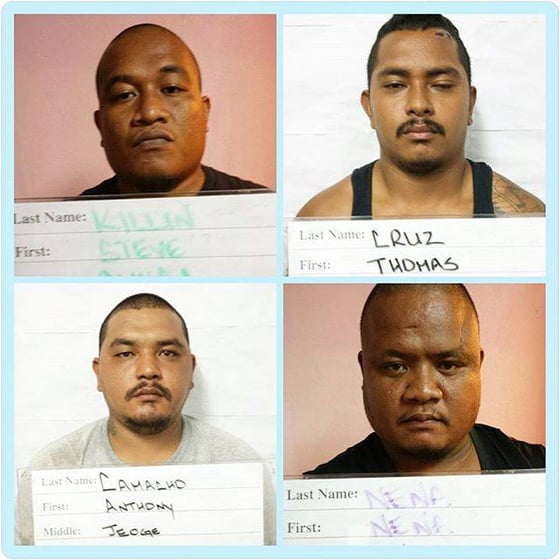 Nearly two weeks since we shared a viewer-submitted video depicting a violent brawl in the middle of rush hour traffic right here outside our Harmon studios, it's reached nearly a half-million views, and also helped the Guam Police Department arrest five individuals in connection to the case.

"This is one particular incident where social media worked to our advantage, and this is the kind of relationships we're trying to foster where we use social media to our advantage to continue to help serve and protect our island," stated Police Chief Joseph Cruz, speaking of the viral video that helped in the arrest of five individuals Thursday night. Dubbed by viewers as "Straight Outta Harmon," the video was captured by a nearby motorist and depicts a handful of men and a woman in a riot in the middle of rush hour traffic - between the punches, one man breaks out a baseball bat, and a young boy jumps out of a car window and throws some punches of his own.

Although police responded to the scene, the street fight was over and done. But thanks to the video and community assistance, police arrested 30-year-old Steve Killin, 33-year-old Nene Nena, 20-year-old Thomas Jay Cruz, 25-year-old Anthony Jeorge Camacho. The four men appeared in court via Skype where they were formally charged with rioting. All but Camacho are being held on $1,000 cash bail.

According to prosecutor James Collins, Camacho is believed to be holding the bat in the video. As a result, he was charged with aggravated assault and rioting. He's being held on $5,000 cash bail. "The only gentleman alleged to have used a weapon is Mr. Camacho," Collins asserted.

25-year-old Anna Rose Tyquiengco was also arrested but booked and released. According to GPD spokesperson Officer AJ Balajadia, Tyquiengco was arrested for child abuse, rioting, and parking on a travel portion of the roadway. Chief Cruz added, "Through the efforts our officers both from the Dededo Precinct as well as our officers assigned to the Criminal Investigations Section the video that was captured and put on social media, we were able to conduct some follow up investigations as well as the help of our citizens being able to reach out to the Guam Police Department."

As we previously reported, the incident is believed to have unfolded as road rage in which one motorist was tailgating the other. Police advise motorists who may feel threatened on the roadway not to take matters into their own hands. Instead, they are advised to contact the Guam Police Department or drive to the nearest precinct. If possible, take the description of the car, the license plate number, and the number of occupants.