Local, federal authorities on the hunt for Yigo bank robbers 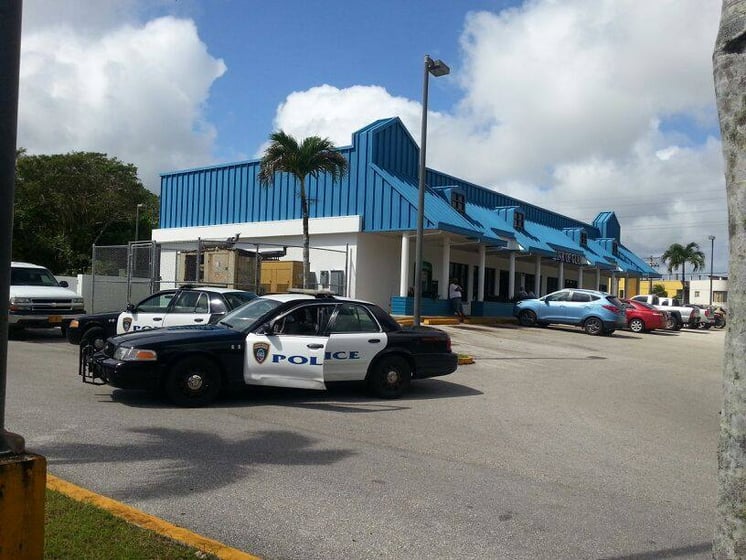 Guam - A massive manhunt is underway for two masked men who robbed the Bank of Guam's Yigo branch at gunpoint in broad daylight. Local and federal authorities have gathered their resources in search of those responsible.

"I heard the lady shout. When I turn around the two guys (were) already inside. (One was) pointing a gun telling us to get down on the floor," recalled Lorenzo Joel. He never imagined his day off would have started as it did today. "I get down on the floor [sic]. I don't want to get shot."

Just before 10:30 this morning, Joel walked into the Bank of Guam to cash his check. That didn't happen, though.  Instead he found himself in the middle of a bank robbery. He didn't know what was going on until he heard a woman scream. "They pushed the door in and almost hit the lady who was trying to leave," he explained. "He said, 'Down on the floor, nobody move, nobody touch the phone!'"

Joel added, "They tell the cashier to get the cash. Once they got the money they ran outside. I don't know how old they are, how tall they are.  I didn't see them clear."  Joel said he complied because the men were carrying guns.

Fan Nimeisar had come to the bank with his sister-in-law to get some school documents notarized. The two were sitting at a customer service desk. "I saw the guy. He was holding the gun he was standing here.  Shouting everybody down on the floor," he said. "I turn around I saw the guy standing with the gun.  The other guy ran and started collecting the money from the cashier."

Nimeisar said the suspect put the cash inside a backpack and within a few minutes the two men fled on foot running into the jungle area behind the bank near Perez Acres. He added, "The guy holding the gun was wearing a mask red mask with a spider on the face - a black spider."

Joel said, "They went this way.  A guy standing outside saw them run out there and run inside the jungle."

The men fled with an undetermined amount of cash. One suspect is approximately 6'0" tall and wore black pants, a bright neon-colored green shirt, and a black mask.  The other suspect is approximately 5'7" and was wearing a black long-sleeved shirt with a red ski mask. Dozens of police officers were briefed on the descriptions and spent the day canvassing the surrounding jungle and following any leads.

Guam Police Department spokesperson Officer A.J. Balajadia says the suspects should be considered armed and dangerous.  Anyone with information is asked to contact GPD at 475-8615/6/7 or the Federal Bureau of Investigations at 472-7465.