Victim was 16 when working at Blue House 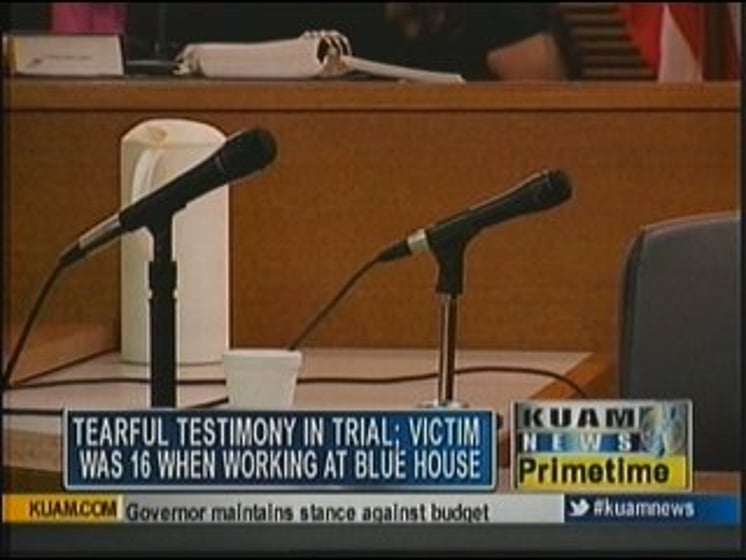 Guam - Another Chuukese woman who came to Guam and worked at the Blue House Lounge took the stand in the trial of two police officers. There was tearful testimony from the witness who says she was forced into prostitution when she was just 16 years old.

Arita Tippingeni arrived on Guam in 2006 thinking she was coming to the island to attend school. Shortly after she arrived her father brought her to the Blue House Lounge and introduced her to the club's owner, Song Ja Cha.  Tippingeni held back tears as she testified that her father told her to stay at the Blue House, where her other sister worked as well and said Cha knew she was a minor but told her father it was okay because she knew a lawyer.

Throughout the trial, Cerco Tippingeni has been named by several of the government's witnesses who worked with Cha to bring young girls from Chuuk to work at the Blue House, including several of his own daughters.  He has never been charged with any crimes and that could be due to the statute of limitations to do so.

Arita testified that on her first night she was told to change into a short skirt and a sleeveless shirt and drink beer and eventually go with a customer into the VIP room.  She said the customer began touching her and she slapped his hand. "If I refused to have sex with them, they will get mad at me and they will go out and go back to complain to Mama San and take their money back and then Mama San will get mad and call the police," she testified.

Arita testified that Cha would beat her with a broom handle, pull her hair and throw water at her when she would refuse sex with customers.

She pointed out defendant Anthony Quenga as being of the police officers who frequented the establishment and told her and the other workers to make the customers happy and listen to "Mama San".

On one occasion, Arita lost Cha's keys so the owner called the cops and one officer arrived on a motorcycle. Arita was shaking as she testified and was asked what the officer told her, saying, "The police also told me that Mama San told him that I'm trying to escape but I cannot escape because I still owe Mama San for the passport and ticket."

"The police told me to take a good look at his face because he's the one that's going to come and look for me," she said.

Assistant Attorney General Jonathan Quan asked the witness if that officer was present in the courtroom today and she acknowledged that he was but that she didn't know his name. He asked Arita what color of shirt the officer was wearing, and she began crying. Quan asked if he was wearing a blue shirt, and she said yes. "Let the record reflect she has identified Officer Manila," said Judge Anita Sukola.

Arita also testified that she saw police come and hang out and sometimes drink at the Blue House. She said she saw Manila come in one night and one of the girls known as "Jackie", Saknin Weria, "jumped on his lap and they went into the VIP room".  Arita also testified that she saw Quenga go into the private room with some of the other girls and said Cha told the girls that Quenga was her "best friend" and "favorite family".

The trial resumes on Monday afternoon.