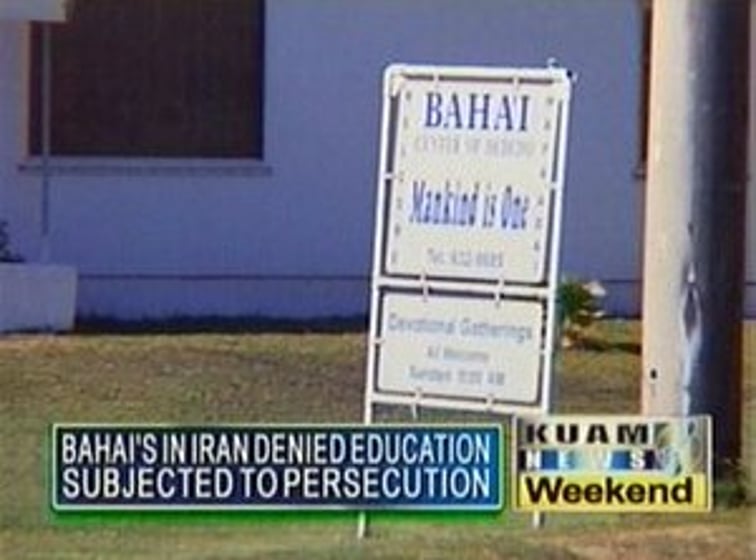 Guam - Extreme religious intolerance and persecution in Iran against Baha'is in that country have resulted in an outcry from the international community and on Guam.  A legislative resolution has been introduced to join with many others, condemning the Iranian government for the persecution and for denying the Baha'i's basic human rights and education in Iran.

There are about 300 members of the Baha'i faith in the Marianas.  Ssepehr Sohrab and Eliria Kim Sabeti are members of the Baha'i Community on Guam and are hoping to raise awareness about ongoing persecution of Bahai's in Iran. "Since the inception of the Bahai faith in Iran in the mid 19th century, that's when the persecutions began and it's been leading up to, it's escalating especially since after the 1969 islamic revoluation," said Sabeti.

Sabeti adds that Baha'i students were barred from attending universities in Iran and professors and educators were dismissed from their positions.  The Baha'i faith seeks to unite all people and races into a universal common faith under the Tree of Unity.  The community on Guam has joined in efforts around the globe in condemning the Iranian government for violating human rights and denying education to those of the Baha'i faith.

The education of Baha'is in Iran was declared illegal in May of last year.  The Iranian government has even sought to go after the Baha'i Institute for Higher Education, where professors and educators would teach students on their own and online. Sabeti says the persecution has only intensified.  Last year the government raided 30 to 40 homes in Iran, seizing properties, confiscating textbooks, computers and educational resources and even arresting some Baha'i professors for teaching calling it a crime against humanity and spreading corruption on Earth.

"Our effort here is one motion that we are trying and doing it's really about awareness and knowing that these things are happening," Sohrab said.

The U.S. Senate and Congress as well as the United Nations have all passed resolutions condemning the actions of the Iranian government. And on Monday, the Guam Legislature will hold a public hearing on a similar resolution to express the island's disdain with what's happening in Iran.

The Baha'is on Guam and around the world are hoping the more people know about the human rights violations and the persecution, the better the chances of stopping the denial of education and religious freedom in Iran.

Lawmakers will accept public testimony on the resolution on Monday at 3pm.