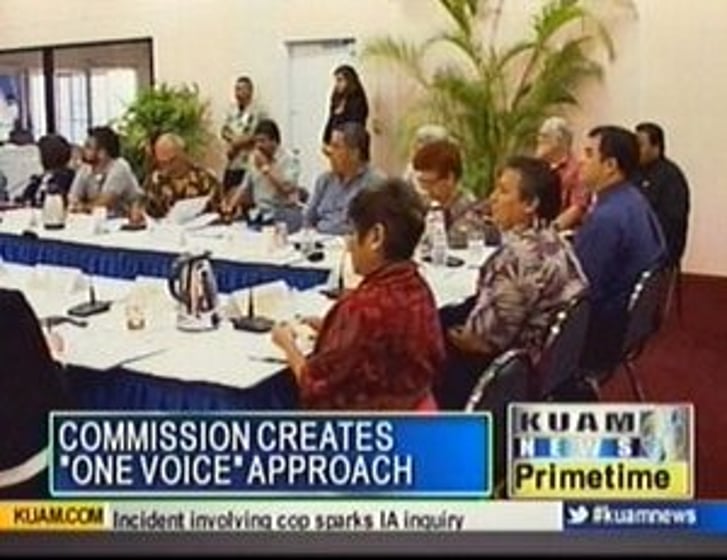 Guam - It was described as historic and a long-time coming, but following Governor Eddie Calvo's executive order in February, the Guam First Commission Advisory Council finally met this morning hoping to establish a "One Voice" approach in addressing several issues to United States Congress and the Department of Defense. What happens on Guam over the next decade namely the military buildup will have significant impacts for generations ahead, and according to the governor, who is Council chairman, with the complex democracy on Guam the only way we can have our concerns heard, like an orchestra, is to work harmoniously when speaking with our nation's capital.

Thus came the creation of the Guam First Commission Advisory Council. "Some of us depending on our personal views, depending on the constituencies that we represent may agree on some areas, but may disagree on others as well," said Calvo. "That is the duty of democracy, but with those voices come about and are heard by the advisory council, then with those voices heard, then our democracy will move forward."

More than two dozen island and community leaders made up the commission each set to be the sound of our community united in a singular purpose to ensure that the residents' current and future political, social, economic, environmental, and infrastructural concerns are satisfactorily addressed on an ongoing basis - many of which are covered in Resolution 15 that the Guam Legislature originally adopted in 2009. The agenda in the resolution includes political status and self-determination concerns, return of excess federal lands and issues relative to the Jones Act.

Vice Chairman Senator Rory Respicio said, "My point is you have the legislature taking its position, you the executive branch taking their position, so by asking the body to adopt that resolution which outlines our priorities of agenda concerns to the United States government particularly Congress, you have a marrying of both these ideas, which are similar so instead of doing these things separately, we have the basis of speaking with that One Voice."

And although she found today's meeting to be a success, Commission Member Congresswoman Madeleine Bordallo says the group still has a big job ahead of them. "Sometimes we don't all agree, it's something you brought up - compromise. I stand by on that, once in a while you have to give in a little bit," she noted. "So I think if Guam, and I think with this first commission now, that we will be able to accomplish, this is a good representative of the people and we will be able to accomplish more."

Each of the members were asked to review the resolution, get feedback from their respective constituents and discuss it further for possible adoption at their next meeting set for next month.