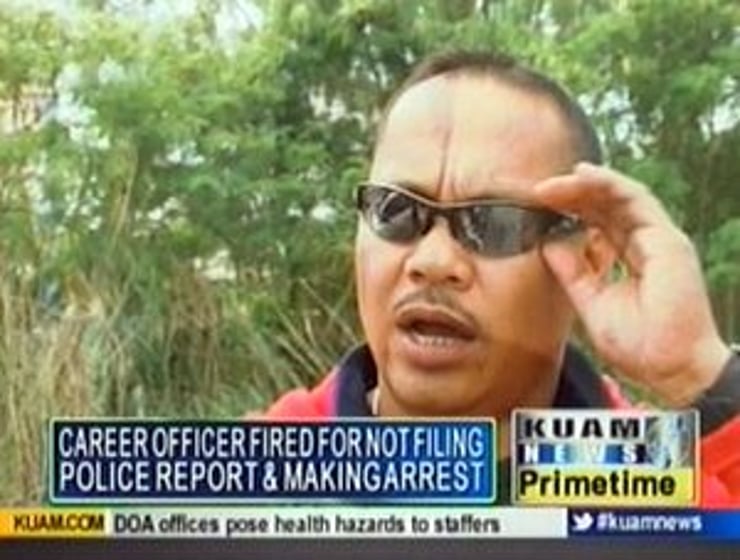 Guam - The Guam Police Department isn't saying much about the decision to terminate a career police officer who arrested Captain Mark Charfauros, but documents obtained by KUAM News today reveal more about the internal investigation that led to the officer's dismissal. The findings have some questioning whether the punishment fit the infraction.

A cop who has been on the force for 20 years is without a job tonight for unsatisfactory performance, insubordination, and failing to submit a police report in a timely manner. Police Officer III Daniel B. Anciano, who is better known by his colleagues as "Troy", is fighting his termination from GPD.  Anciano was served his dismissal letter from the chief on Tuesday. According to documents, the final adverse action was imposed after Anciano in late-January arrested Captain Charfauros for soliciting another officer to commit assault.

As we reported, Officer Burt Carbullido filed a complaint with the Agat Precinct alleging he had been asked by Charfauros to go with him to Yona to "deck a guy"- the same Yona resident who filed a criminal trespassing complaint against the police captain.

Anciano was assigned the case by his supervisor, Officer Joe Borja, on January 20.  According to information provided to Internal Affairs, Anciano attempted to interview Captain Charfauros and Officer Mercy Grino about the alleged phone conversation with Carbullido, but neither responded.  Anciano is accused of failing to follow direct instructions not to make an arrest but instead complete the report and forward it to the Criminal Investigations Section. He was also tagged for unsatisfactory performance for allegedly neither investigating the case without completing crucial interviews nor obtaining proper guidance from the Attorney General's Office and as not informing the chain of command - prior - to making the arrest.

But according to the IA investigation that was attached to the final adverse action, Anciano was never informed not to make the arrest. It was Officer Borja who had been told by his supervisor that the case was to be investigated and forwarded to CIS.  Borja made it clear however that CIS had a conflict and attempted to have juvenile detectives handle the matter.

According to the interviews, Borja was told they were unable to handle the case because they were already investigating the trespassing complaint against Charfauros. On January 28, Anciano asked Borja to accompany him to Charfauros' home in Agat.  Both discussed the case and agreed there was enough to effectuate an arrest. Anciano told IA officers that he and Borja informed Charfauros repeatedly that he needed to be interviewed so the case could be closed, but Charfauros instead told them to speak to his attorney.

The police captain was arrested and the department's chain of command was then notified. Borja told Internal Affairs officers that he contacted his supervisor, Lieutenant Manny Chong, who asked him if the Attorney General's Office had been contacted. The assistant AG reportedly told the officer that it was above his pay grade.  Lieutenant Chong told IA officers that he informed both Borja and Anciano to forward the preliminary findings and supplemental reports to CIS for follow-up.

According to the adverse action, Anciano was found to have violated department rules by failing to submit a police report in a timely manner and failing to inform his current supervisor that he was going with borja to make the arrest.

Police Chief Fred Bordallo noted that Anciano's job is critical to the mission of the police department and he must remain focused at all times as doing otherwise will not be tolerated.  Bordallo said GPD must foster an environment in which the employees not only decline to steal, lie and misbehave, but also to continually strive under proper guidance to find better ways to serve and protect the public.

Anciano has 20 days to appeal his case to the Civil Service Commission, which he has already initiated. His previous supervisor who assigned him the case, Officer Borja meanwhile, was served adverse action - which was a letter of reprimand.

Chief Bordallo has not provided any comments about the termination of Anciano, saying it is a personnel matter.