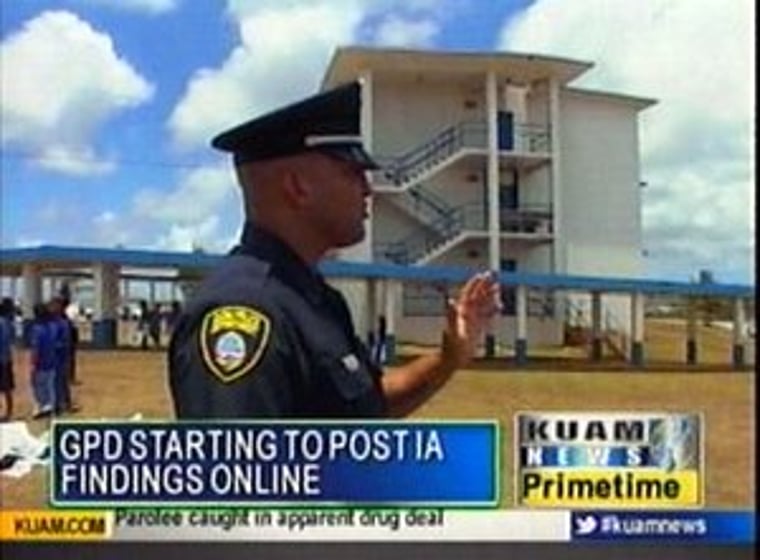 Guam - Last June, KUAM News reported at the time that the Guam Police Department had at least 53 active internal affairs cases it was investigating. Today the force is beginning to release the findings of those investigations to the public.

Although GPD's got a long list of IA cases. Today at least it's taking steps toward more transparency as the agency posted on its website the results from three separate internal affairs investigations that it conducted and concluded in 2011. In compliance with public law, the Guam Police Department is starting to post internal affairs reports online. Because the Department of Administration's system was offline on Monday, GPD could not post the reports, but today three were posted for the public to read.

The first one involves a complaint filed in February last year against then-Police Officer Trainee John Edwards, who failed to take a report of a crime. The IA complaint was filed against him after the father of a minor tried to file a complaint against an active duty military man who sent photos of his genitals to a 13-year-old female minor. Edwards allegedly told him that a crime had not been committed and then proceeded to contact the alleged suspect via e-mail, using his official GPD account, telling him to delete the evidence.

According to the IA case posted online, the unsatisfactory performance was sustained. As well his supervisor at the Neighborhood Patrol Division during that time was also found in violation.

The second IA case released by GPD involves allegations that a police officer was using drugs while off-duty. An investigation into the officer's drug use was prompted after she failed to show up for work for several days. Officers later sustained the allegations and found Audrey Mashburn in violation of conformance to laws. She later resigned from GPD.

The third IA report posted online involves Officer Paul Saturnio. The investigation was launched against him after he was arrested for assault and family violence last April.  The allegations against Saturnio were sustained.  He eventually turned in his resignation.

Today's posting of three reports is a start. According to our files they've got more than 50 more to go. The report still hasn't been released about Edwards' case involving leaving a gun unsecured at the Ypao Hotel in February last year. Or the report on another officer, David Q. Manila, who was given adverse action after he admitted in federal court that he paid an employee at the Blue House Lounge for sex.

There's also the IA investigation into the incident at Government House last year when an officer accidentally discharged his duty weapon and shot his hand. The officer was transferred to the Southern Precinct. Two separate IA investigations were also launched in 2011 for Officer Kevin Guerrero, who was arrested in April for misdemeanor assault, and Sergeant Rocky Anciano for official misconduct. Three separate complaints were also filed in March 2011, one of which involved an individual who alleged police harassed him before learning he was actually not driving the vehicle involved in a hit and run.

The second involved a couple who said they were pulled over and alleged police terrorized them before realizing the vehicle they were driving was not stolen. The third was made by a parent at Okkodo High School who alleged his child was assaulted by police officers claiming the officer twisted his son's arm at the school. Another investigation surrounds a riot in April 2011 outside the Royal Gardens Condominiums. An IA complaint was filed alleging a police cover-up, as the suspects involved were confirmed to be related to the District I commander.

We should note that GPD did not post any Internal Affairs investigation reports for the year 2010. According to GPD spokesperson Officer A.J. Balajadia because Chief of Police Fred Bordallo took the helm last year, the reports that are being posted online will start in 2011 going forward.  More IA reports will be posted in the future.