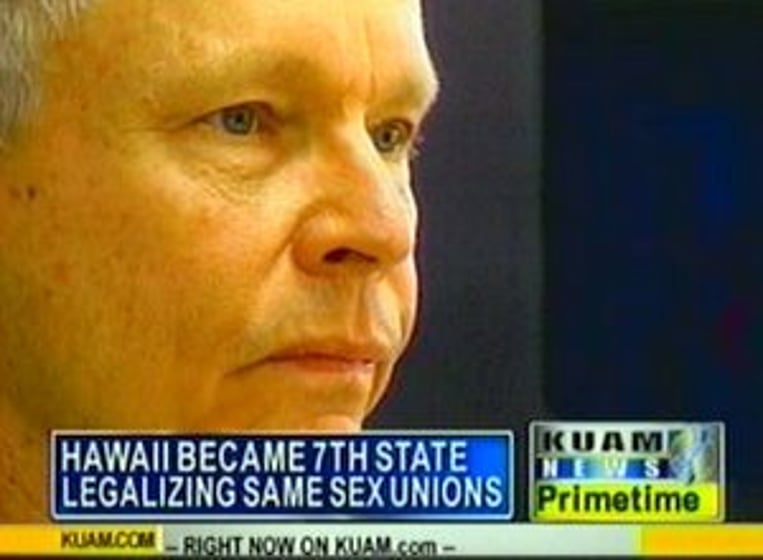 Guam - Governor Neil Abercrombie signed same-sex civil unions legislation into law making Hawaii the seventh state to allow such unions. The gay community on Guam is with the action and many are hopeful that the island will follow suit soon after legislation failed to make it to session floor last year.

"It's encouraging to Guam and I think the tide of sentiment throughout the nation is shifting and has shifted quite dramatically, really in the past five to tem years, noted Attorney Bill Pesch. He tells KUAM News that he's optimistic that tide will hit the pacific sooner than later, especially with the historic repeal of the military's "Don't Ask, Don't Tell" policy.  "I see that as the harbinger of major social change," he continued, "because if you look at any of the major social changes in the United States over the past several decades, whether it be gender equality, racial equality, and now I think sexual preference and equality, the military really has always led the way."

But even with the social mindset shifting, one major obstacle for the gay community especially locally has been the Catholic Church vehemently opposed to gay marriage or same sex civil unions. Even after Abercrombie signed the legislation into law, the Hawaii Catholic Conference expressed concerns that the passage of the legislation is a step toward legalizing same sex marriage.

Said Pesch, "I think the church has lost so much standing in the community when it comes to moral issues that I think people will decide for themselves." He added, "It's just an obstacle for those of us who are trying to raise our families and it's unfair. I'm a taxpayer. I think I give a lot back to this community and I deserve the same rights as any other individual and I think that's going to come."

Living on Guam for the last 33 years and spending the last 15 with his partner, Pesch is optimistic that the community will right the wrong and gay couples will have the same rights as married couples. But he doesn't believe a referendum is the way to go.

"It may well be that if this went up for a vote today, the public may vote it down to give equal rights to same gender couples," he theorized. "But the Legislature is supposed to see above that and we have elected them to make these hard decisions. So make them."

Vice-Speaker B.J. Cruz has been a proponent for same sex civil unions during the 30th Guam Legislature, but couldn't obtain the necessary votes for passage, which left the bill dead before it could hit session floor. He's not ready to introduce the legislation again just yet. He said, "Until I can get an educational campaign to get people to understand it more clearly, I'm not going to move on it."

Attorney Pesch and others are hopeful the educational campaign will bring about same sex civil unions here to help them obtain the rights they continue fighting for. "Exercise your conscience. Get behind really a civil rights movement and encourage our senators to do what is correct - and that is get behind a bill that will recognize same-gender relationships," he encouraged.