Suba back at Guam Police as captain 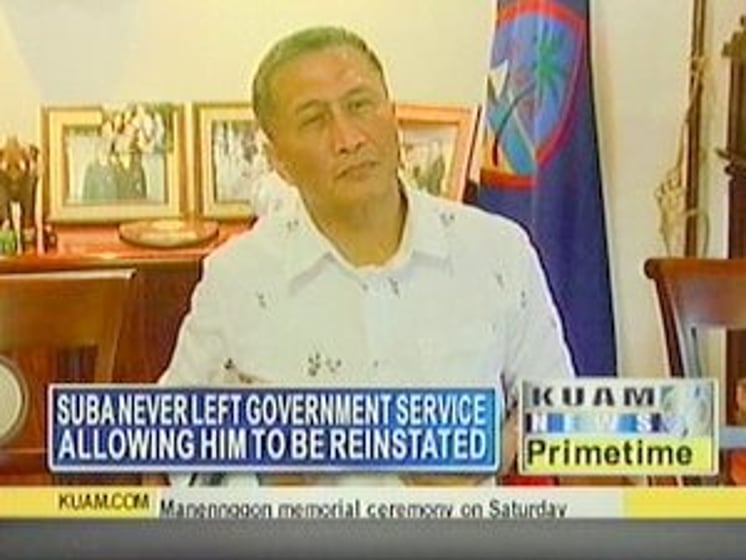 Guam - The legal opinion is in: Paul Suba is no longer the chief of police and is now reinstated back to a captain - the position he held prior to his appointment to lead the force.  While Suba had publicly stated his plans to retire from the force, instead he took leave, never departing from government service.

And it's for that reason that the Attorney General's Office has determined Suba can return to his previous post, even though he doesn't hold a degree that the law requires a captain have.

In May then-acting governor Mike Cruz said, "In consultation with Governor Camacho, I accepted Police Chief Paul Suba's request for retirement this afternoon."  But retirement is something Suba never did, and instead it left the door wide open for him to come back to the Guam Police Department.

According to an opinion released today by the Office of the Attorney General, had Suba retired like he said he was he wouldn't have been allowed to return as a captain because he no longer would have been eligible. Public law enacted a year ago requires that captains have a college degree, something Suba didn't have when he used to be a captain and something he doesn't have currently.

According to an opinion issued by the AG's Office the two conflicting laws the Department of Administration needed clarification on: (1) the new law requiring a college degree for captains, and (2) law that allows for police and fire chiefs to return to the classified positions they held before they were appointed.

DOA needed guidance on whether Suba actually was able to return because he didn't have a college degree now required under the new law.  The AG's opinion, written by Assistant Attorney General Marianne Woloschuk, states that, "If Mr. Suba were today seeking elevation for the first time to the rank of Police Captain, under the current state of Guam Law, he would not qualify for that position."

Now, had the acting governor fired Suba, which he said he would have if he didn't retire back in May when the announcement was made, then Suba would not have been allowed to return to the captain position.  Woloschuk in the opinion reiterated 5GCA Section 3104, which states, "Notwithstanding any other provision of law, a police officer appointed to the position of police chief...shall be reinstated to the position he held immediately prior to such appointment...upon termination of his employment, if not removed for cause."

The bottom line is that had Suba been fired from the Guam Police Department or retired, the door would have been shut on the possibility of making the return he's making today.  But firing Suba some would say would not have been an option for the administration, as one of his biggest supporters - Governor Camacho - has always stood by his side through thick and thin.  Just a few weeks after the Cruz announced Suba's forced retirement in may, talks of his comeback were already circulating.

On June 11, Camacho said, "I'm looking at the fact that he is still of great service to the territory, and Paul is a person I believe in - no matter what the media say."

Despite confirming last month that there is not a vacant captain position in the police department, late this afternoon DOA signed off on two GG1s - one that terminates his status and chief and the other that reinstates him to captain.

Acting Chief Frank Ishizaki has not yet decided where Suba will be assigned.  Suba, who picked up his captain badge today, declined to be interviewed, saying he just wants to reintegrate back into the department he once led.