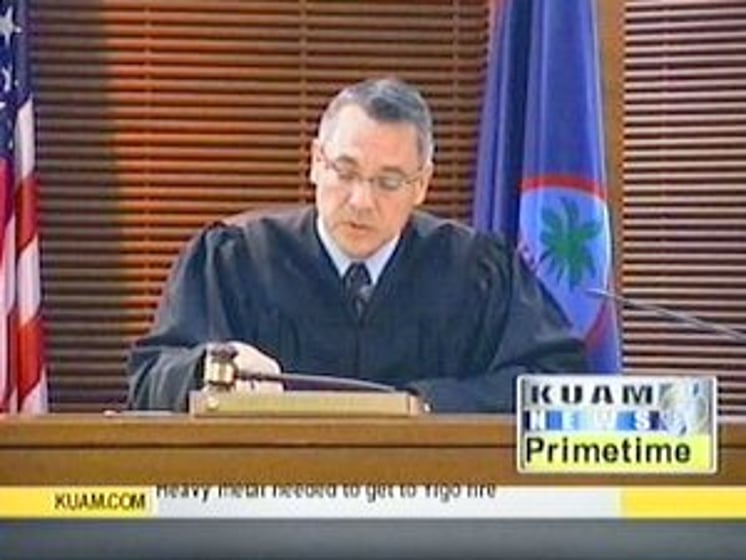 Guam - It's taken a week for KUAM to finally have its day in court, as the company's attorneys pursue efforts to have a search warrant that was executed last Wednesday set aside and a single document that was seized by police returned. A document seized by agents with the Guam Police Department's Criminal Investigation Division from KUAM's newsroom last week is now in the custody of the Clerk of Court.

"Typically, GPD would continue to possess things that are acquired via a warrant, although subject to an order from the court I would, I want to have it in my chambers until such time I have another determination," proclaimed Judge Vern Perez today.  During a hearing on KUAM's motion to quash a search warrant executed at the KUAM Studios in Harmon a week ago, the Superior Court judge said he wanted to safeguard the document that was seized by police.

That document that aired on KUAM's newscast last week showed that Police Officer Trainee John Edwards' polygraph had been sent off-island for external review because he did not pass the test.  It's that same document that police have alleged was an official police document stolen from a personnel file at the department, which, we should note the document they took from KUAM was a copy and not the original.

The story resulted in police launching a large-scale investigation into who leaked the information to KUAM, resulting in the execution of a search warrant at our offices last week that we contend violated our Constitutional rights and federal law.

Because police intended to return the warrant this afternoon, Judge Perez said he did not need to hear or act on KUAM's motion.

GPD Legal Counsel Jim Mitchell informed the court that officers had hoped to return the warrant to Judge Anita Sukola - who originally signed-off on the warrant last week - but because she is off-island, they needed another judge to take the return.  In light of the judge's decision to safeguard the original document taken from KUAM, Attorney Clark reminded the court of the Guam Shield Law that protects sources of information for news stories.

"We see this search warrant as basically a way to circumvent the Shield Law, get to the document so that they can get to the source of the KUAM story," Clark continued.  "I think Mr. Mitchell has actually highlighted if anything else, the concern we had about GPD continuing possession, as along as you're conducting an analysis of this document which our argument they were never lawfully entitled to have in this first place."  Clark added the search warrant was defective.

The affidavit filed with the Superior Court when police first brought the warrant to Judge Sukola states that former police chief Paul Suba filed a theft complaint on May 11 - a day before the search warrant was signed by the judge and executed at KUAM.

But the police blotter on May 12 clearly shows that at 4:14 in the afternoon, Suba filed the theft complaint.  The problem: police were already at KUAM executing the search warrant in search of the document we aired earlier that week.

The judge ordered that GPD cease any further analysis of the document and ordered that it be turned over and held for safekeeping by the Clerk of Court until an evidentiary hearing can be held to determine who its rightful owner is.