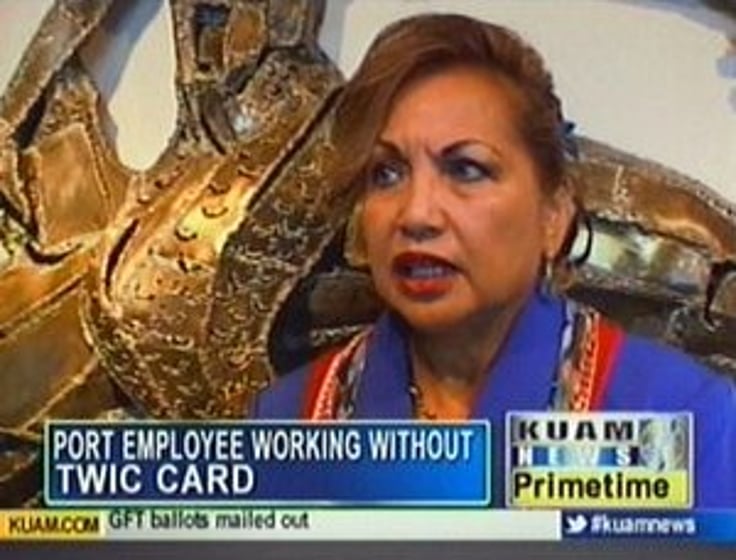 Guam - Allegations against an employee of the Port Authority of Guam are currently under investigation along with claims of nepotism by its upper management. Deputy general manager Anisia Terlaje says its unfortunate that reports are calling the re-hire of her nephew, Patrick J. Sablan, as an act of nepotism.

"There's no nepotism here," she stated. "Additionally, they wanted to establish that I had everything to do with his hiring. The truth is he went through human resources, applied and went through the complete process, which includes a police report, a court clearance and a drug test. HR has all that in the file." Sablan is the son of Terlaje's first-cousin, and based off of nepotism regulations his employment doesn't qualify as so because he is neither an immediate family member such as the mother, father, son or daughter, living together or immediately under her supervision.

Sablan is a cargo checker under operations with many layers of management between them. Sablan meanwhile does not have a Transportation Worker Identification Credential card, which is required by all Port employees who need access to secured areas.

Terlaje says she only recently learned that Sablan did not have a TWIC card after discovering he had been detailed to the administration area. "There was no way for us to know of any other situation with the applicant other than the fact that he provided a clean record from the police and the court clearance and passed the drug test so that's where we followed the proper procedures," she said.

She says this isn't the first time that someone had a delay in getting a clearance and apparently a discrepancy led to the Sablan's roadblock of obtaining his TWIC card. She added, "From the information that I was able to gather, he has to go back to the state of Washington. All I know is that something showed up, I believe it's a warrant...in Washington, but there was not a conviction, so it think it's premature to judge a person based on that."

Sablan had been employed at the Port before, but according to Terlaje had voluntarily resigned; however, she was unsure as to why. KUAM News had contacted PAG general manager Mary Torres for comment, who instead issued a statement saying she recently became aware of the situation with Sablan and his failure to obtain a TWIC card and is currently investigating the matter within the parameters of Port personnel rules and regulations and will take appropriate action as necessary.